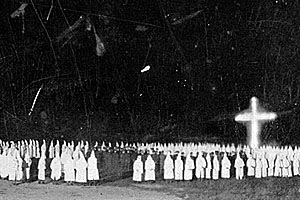 Is there any better demonstration of the immense mental health crisis gripping New Orleans than Mayor C. Ray Nagin? His latest public episode is a widely repeated story in the Washington Post in which he trots out his theory of a vast comspiracy to depopulate New Orleans of African-Americans.

It seems fitting that the largest single population of civilian post traumatic stress disorder victims since World War II should be led by a man who is the poster child for our tenuous mental state.

Listen, Ray, I feel for you, man. Remember, I stood up for you when you made your Chocolate City speech, which was not the popular thing to do for a guy as white as a loaf of Bunny Bread. I understood what you meant, and why you said it that way and to that audience. I never forgot Jimmy Reiss' comments to the Wall Street Journal I examined in a piece from Sept. 26, 2005 titled Knights of the Invisible Hand.

The new city must be something very different Jimmy Reiss, head of the New Orleans Business Council Reiss told the Wall St. Journal, with better services and fewer poor people. "Those who want to see this city rebuilt want to see it done in a completey different way: demographically, geographically and politically," he says. "I'm not just speaking for myself here. The way we've been living is not going to happen again, or we're out."

Those people are out there, but they're not the real problem.

I know why you feel this way, while you feel like the whole world is arrayed against you. Hell, Ray, it is arrayed against us all. The Federals, the incomptenents in Baton Rouge, the insurance companies, all of them are in on it. This is not, however, a conspiracy. It is more of a complicity; a willingness to let events run their course.

I don't doubt there are big high fives all around the table at the Republican National Committee when they talk about the positive fallout of having so many of the black and largely Democratic voters scattered to the four winds, but that does not amount to an active conspiracy. It is simple a convenience; no, a great turn of luck for them, like the attack on 9-11 that allow them to reconstitute the Cold War as the War on Terror.

What's happening here is not happening to you in particular, or to the people you believe you represent. Listen, man: you're not Moses, the annointed leader of the Children of Isreal. The entire aftermath of the Federal Flood was not Pharoah out to get you and your people, and acting like that's the story line isn't going to bring about biblical miracles to restore the city to what it was. That's the PTSD and whatever else you have going on talking. Somebody who cares about you needs to take you aside and talk to you 'cause your messed up, and every time you open your mouth you mess us all up.

It's not about you. It's about all of us, the 200,000. Its about everyone who's picked themselves up by their bootstraps and made their way home, all or at least mostly at their own expense because they love this city. I don't have a demographer on retainer so I can't tell you what the current population is. I can only tell you what it looks like, and with every passing day I travel the streets it looks more like New Orleans, the New Orleans you and I both remember. The vast conspiracy hasn't blocked the people I see.

It's not everybody, but its everybody who cares enough about New Orleans to find someway, anyway to come home. We are black and we are white, and we're all New Orleans. It's a start, enough of a nucleus to grow a new city like the sugar crystal a child grows around a string in science class. The 200,000 care enough about this place that they are going to make a new city here, one we will all recognize as New Orleans, but only if we can overcome.

Your crazy talk isn't solving any of those problems, and only makes the work we are all doing around you and in spite of you to solve them that much harder. If you want to save yourself, you won't do it by going on some messianic trip to try to climb up to the next rung on the political ladder. By doing that, you put yourself smack dab in the same class as those high-fiving suits at the RNC and the developers salivating over the projects and all the other soon to be empty property in the city.

"A leader is best when people barely know he exists, not so good when people obey and acclaim him, worst when they despise him. But of a good leader, who talks little, when his work is done, his aim fulfilled, they will say, 'We did this ourselves.'" — Lao-Tse

In our case we really will have done it ourselves, but then "talks little" certainly does not apply to C Ray.

Me, I don't think C Ray believes any of this conspiracy crapola. He was pandering and primping for an audience that wanted to hear him say something outrageous.

Bear in mind that the C in C Ray stands for Clarence.

Apparently, every time he puts his foot in his mouth, an angel gets his wings.

That implies his words are actually doing some good.

At this point, I think chaos theory applies, a la the butterfly effect. The Walking Id will open his mouth, and then, halfway across the world, the next tsunami will be gurgling up from the depths of the Pacific.

Leigh, in the context of January 206 his words had some meaning, and good reason behind them. Now they are either insanity or political pandering. Even in the later case, he must be nuts to think he is suitable for election to anything after this term

As I listened to the speech the other night I thought well he managed to do the impossible because I did not think C. Ray could top the chocolate city remark (I am not as forgiving as you are about that one) He did x1,0000. Truefully, I think he is a prime candidate for one of our precious psychiatric beds.

Between working full time and "spring fever" I still try to read all your posts and again..you nailed it. Great blog. snappy posting as anon

Keep on making everyone THINK as cursed tea said.

I feel better now, not becauseof ray, but because of your post.

Post-Traumatic Stress Disorder is a type of anxiety disorder experienced by individuals who have undergone a very traumatic incident. However, it should not be confused with the usual grief felt by most people after the death of a loved one. The symptoms of PTSD include flashbacks, nightmares, anger or rage, emotional detachment, memory loss, hyper-vigilance, and depression. http://www.buy-xanax-online-now.com/

I hope the new city will be modern and comfortable.