As the New Orleans celebrates St. Joseph's Day this weekend in the Sicilian tradition of altars with offerings of food to the saint, I want to call out this online altar for all of the dispersed survivors of The Flood.

With so many still not home, there are probably altars not being offered this year all over the city. But many are back, including one in devastated St. Bernard Parish and the big one at St. Joseph's on Tulane Avenue. Searching for pictures, I found a tiny thumbnail of one of an altar at Brocato's, one of the altars that will not be there this year.

For those unfamiliar with the custom, there is an explanation on the virtual altar site, including explanations for the various gifts of food offered and their symbolism.

With the city's large Italian population, St. Joseph has always been one of area's most important saints. When I would bring my wife or family home to visit, I would often point out how the feet on the statues of St. Joseph would be worn, as men would often come to pray to him, laying one hand on the saint's feet as they did so. I don't know if this particular form of devotion is universal, but I've noticed the wear on most of the older statues I've seen in NOLA

I hope to convince my wife to go out and visit the altars today, even though she will probably want to stay in and paint the living room of the new house. While St. Joseph is considered "officially" the patron of the dying, fathers and carpenters, he is also widely regarded as a patron of families, in his aspect as patron of fathers.

As I posted somewhere else in a discussion last night, a woman who would leave her children and old home behind and move into a strange house in an alien city, all for love of her husband, is in need of intentions to and attention from St. Joseph. So, as the father of this temporarily severed family, I ask: may he protect and cherish and nourish our separated family and our new house.

And keep an eye on that carpenter cutting the new door and working on the kitchen.

Oh, and please calm the new home buyers who have a contract on the Fargo house, so that we may all get moved and reunited in NOLA on time.

So, enjoy St. Joseph's day, and if you're far from New Orleans today, don't' forget to visit the virtual altar.

Don't leave without your bag. 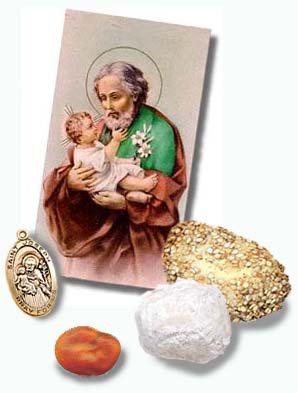